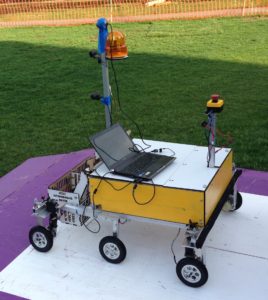 The UCSC Autonomous Rover is an autonomous rover that competed in the NASA Centennial Challenges-Sample Return Robot 2013. It uses computer vision to recognize a pre-cached object and uses a path finding algorithm to navigate to the object location. To simulate extra-terrestrial limitations, the robots were banned from using magnetometers(Compasses), GPS, and GSM. 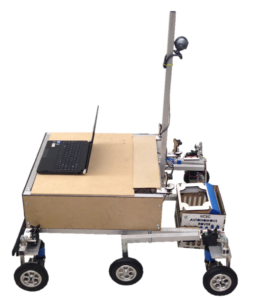 Mechanically the rover is built with rocker bogie suspension system to make it possible traversing versatile and terrains. It is able to make in-place turns and weights 30 kg.

The D* lite path-finding algorithm was used which enabled the rover to approximately reach a goal destination. We used a Haar cascade classifier to classify the sample object and recognize it in the field. The rover returns using the D* lite and looks for a classified QR code that was left at the starting platform.