There are some obstacles when it comes to extra-terrestrial traversing. Traditional and conventional wheels are not an optimal solution and bearings need to be gold plated and rubbed on each other which associates fast depreciation since they can not be lubricated by oil in the space (it either burns, freezes, or evaporate).

As a solution, we were inspired by the locomotion of turtles. This project mimics the movement of the legs of turtles and works on the basis of  differential friction that the turtle’s feet make with the surface. To overcome the constraints set by the atmosphere of other planets, we simplified the design to require the least number of elements. The robot only uses two gears of the same aspect ratio and one servo motor. 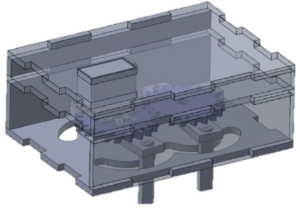 This robot is a semi-autonomous rover that can move forward and turn left and right by the commands it receives. To diversify the terrain traversal, we plan on lowering the center of mass and using the plastron inspired part covered in the fabric to increase stability.